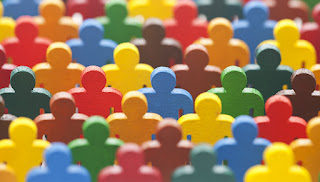 “There is good news here.  The illogical, ever-changing, and contradictory reality of race means that we are not locked into the problem of racism.  We can escape this madness because we are the architects of it.”  -- Guy Harrison, “Science and Race,” 2020, in Skeptic (25:3)

The election of Barak Obama to the US Presidency did not mark the end of racism in America, as many might have hoped.  In fact, incidents such as George Floyd’s death seem to have escalated.  Meanwhile the DEI (Diversity, Equity, Inclusion) movement is picking up momentum as a way to create a new set of standards for the way race is handled in groups (especially at work).  Diversity has been officially adopted in an Executive Order signed by Biden in June 2021 (adding the term Accessibility, DEIA) as guideline for the federal workforce.

So it may be time to take a break in the race discussion to simply ask what racism as a motivating force that everyone knows about and feels deeply about, but almost no one can explain factually or scientifically.

This is because there is no scientific basis for race.  There are simply no categories that describe human differences that are consistent across time, geography, and genetics.  Scientific knowledge can point to no fixed descriptions, much less subspecies definitions, that are even useful as heuristic guidelines.  There are simply too many interactions and variations across the gene pool to hold race up as a fixed or even flexible idea.

Which means that race is a social, political and cultural concepts, “common sense” that flexes across time and place, as in references to the “Italian race” and “Irish race” in the record of 19th-century immigration.  Color coding as the first ranking of people is a very recent development in race history.  And in fact the very first thing we notice about people is not their color but their gender.

Seeking solutions to “the race problem” begins with an understanding of what race is not.  It is not a biological difference between people – there is one, but it isn’t race, it’s gender.  Of which there are just two, male and female (by DNA, XY and XX) not dozens or hundreds, as the recent trend in virtue-citing “gender diversity” implies.  It is not a matter of subspecies identification.  All contemporary humans are homo sapiens sapiens, as we have been since 40,000 years ago.

In his comprehensive study Race and Reality: What everyone should know about our biological diversity (2010), journalist Guy Harrison lays out the fundamentals of human unity and distinction, showing up the wide differences between the popular concept of race and the scientific view.

The race question should be translated to questions about cultural difference.  The reason is that culture is more central to human diversity, and seems to explain diversity better, than differences in physical or genetic makeup.  Ethnicity takes culture into account but doesn’t fully explain how the physical and the mental software of culture interact. This is the work of cultural analysis, which proposes the art and science of Cultural Competency as the way to understand and deal with both the causes and effects of racism and race bias.