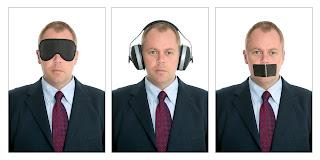 “Your assumptions are your windows on the world.  Scrub them off every
once in a while, or the light won’t come in.”      -- Isaac Asimov


If you haven’t heard this one before, try to answer it:

A father and his son are in a car accident. The father dies instantly, and the son is taken to the nearest hospital. The doctor comes in and exclaims, "I can't operate on this boy."

"Because he's my son," the doctor responds.

How is this possible?

The “Why can’t the doctor operate?” riddle shows how assumptions can block answers.

Only by blocking the idea that the doctor has to be male (the father) can you get to the answer that the doctor must be female (and the boy’s mother).  This is a simple example of extinction: dismissing an unproductive idea masking the solution from being seen or developed.

What assumptions do we routinely make that create problems with problem-solving?  Usually our common assumptions serve us well.  They keep us from having to reinvent reality every time we wake up. This means that every day, we assume thousands of “facts”:  But in the case of open-ended problems, those that are new, unfamiliar, unsolved, or ongoing, preassumptions (as they are called in psychology—assuming you know basically what things are and how they work) can actually block or derail our efforts at understanding problems, imagining solutions for them, then working solutions into practical tools or fixes we can apply.

Take the mislaid keys problem, a common real-life conundrum.  When we look for our lost keys, we look in places where it’s easiest and most familiar and well-lit. Most of time we search around our home or office in the usual places—and most of the time, we find them.  But when they are hiding in an unusual or unaccustomed place–when ordinary assumptions don’t serve the purpose–we have to seek answers further afield, like our sports bag, notebook cover, refrigerator, under the dryer, or, sometimes, in the lock outside where we actually left them.  Extending perspective in this way is a quite normal form of creative idea-generation.

This leaving the familiar behind, or out-of-the-box thinking, is all the more important for solving persistent wicked-tricky problems with limited resources.    Think about it this way:  The best solutions aren’t obvious, or they would already be implemented everywhere.  Discover the problem-within-the-problem, the core problem lurking inside, through recognizing the solution (not the usual sequence).  But if we’re taking some concept or belief for granted, problem solving is all but impossible because it’s being very effectively blockaded—outside our awareness and knowledge.

There is a connection between Intelligence and Creativity.  Intelligence is the ability to acquire and apply knowledge and skills for general cognitive tasks – understanding what things mean, how they are related, what information might be missing, and how to fill it in, either to carry out actions or to plan for the future by making correct inferences about what things mean and the consequences of events.  Creativity takes intelligence a step beyond—by questioning information, ideas, and standing assumptions to generate new ones and forge new connections.  This calls for the act of destruction as well as generation of the new.

To quote physicist Nikola Tesla on creativity:  “The progressive development of man is vitally dependent on invention. It is the most important product of his creative brain.”  This is often a matter of redefining the territory in which to look for the most promising ideas.

A full 40 years were required for Englishman John Harrison, a carpenter and clockmaker, to solve the Longitude Problem, the age-old problem of east-west navigation that thousands of minds tried to crack without success over centuries of seafaring disasters.  As Dava Sobel explains in her 1995 history Longitude, once Harrison was able to determine that the solution was mechanical (the chronometer) and not astronomical (the lunar distance method), he was able to work out the solution.  After over four decades of daily frustration, and battles with everyone in authority in science and government, Harrison finally managed to win most of the 1714 Longitude prize.  The issue was deciding where to look, and stop looking, for the answer.  Once that territory was defined, he developed his sea clocks (H1, H2, H3, and H4, “The Watch”), the last completely different from the first, a seeming nonsequitor in evolving the most important time keeper ever built.

Another example of defining the territory is the discovery of the missing planet Uranus. In 1781 William Herschel discovered Uranus under the assumption that it was a star or a comet.   Through a self-made telescope this astronomer instantly doubled the diameter of the solar system as the first to discover a planet since antiquity. Beyond inventing his original lens to extend humankind’s vision of the heavens, Herschel could show other astronomers where to train their focus.

How about these “truths” that “everyone knows”:  In a country with the world’s best water supply, no one would pay for water because this is a commodity that’s practically free (bottled water).  Americans don’t need a scientific computing instrument in their home (the personal computer and androids), nor do they need or want microwaves in their kitchen (microwave oven).  We don’t care much for raw fish and no such product would ever command a premium price (sushi).  And who would think of spending four years of their life working hard to master subjects they don’t understand and will probably never study or use again—for up to $60 K a year (college education), only to end up in decades of debt?  In addition, would anyone pay top dollar (over $130 a day) to walk through a collection of fake buildings (the theme park)?

Assumptions are always worth checking against.  There’s a good chance we are all making a critical assumption that stands between us and the hunting grounds of a great discovery.
Posted by Margaret J.King,Ph.D. at 2:39 PM 1 comment: