“Nothing is less real than realism. Details are confusing. It is only by selection, by elimination, by emphasis, that we get at the real meaning of things.” 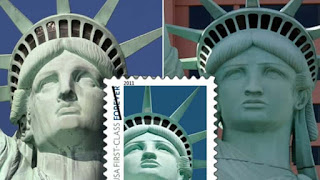 I. Better than Authentic


“Every great work makes the human face more admirable and richer, and that is its whole secret.” –Albert Camus


America’s quintessential icon is “Liberty Enlightening the World,’ the very image of our country’s values enshrined on Liberty Island in New York Harbor. When the US postal service introduced its Statue of Liberty “Forever” stamp in December 2010, the striking face of the statue was an instant hit. The image was engraved from a stock photograph of the statue chosen and purchased from Getty Images.


More than three months after the issue the Postmaster General was informed by a second stock photography company, Sunipix, that the image was not that of the original Statue of Liberty, but a photo of a  replica located outside New York-New York, the casino hotel in Las Vegas that the sculptor, Robert Davidson, now calls a “reimagining.” The replica’s creator then sued for copyright infringement and, as of this writing, was awarded $3.5 million by a federal court on the grounds that his “reimagined” work established his piece as different enough from the original to be protected.


Which raises the issue of what was actually copied – an image, a replica, a reimagining, Bartoldi’s original sculpture, or the scaled-up monument that stands in New York Harbor today. The bigger cultural question is why that particular image was selected by Terrance McCaffery, longtime head of stamp design at the USPS, from the hundreds of stock photographs he reviewed and why the USPS liked the image so much they kept producing it even after they realized it was not taken from the real Statue of Liberty.


In a side-by-side comparison, the later version has, as Davidson’s attorneys argued, “Sexier, more fresh-faced, with smoother, fuller lips….updated and more youthful and desirable, and a little more feminine“-- more current with beauty standards based on youthful female pulchritude (NYTimes, July 7, 2018, p. C3). Which very well may be why McCaffery and the USPS preferred it over other images and why it has proved so extraordinarily popular. Davidson’s sculpt was a face more in line with contemporary standards of beauty, a face twenty-first century Americans could identify with (and did – it sold approximately 4 billion copies).


And despite the new face’s modern appeal – and McCaffery had hundreds of other images to compare it to –no one in the USPS involved in the project ever realized they were not looking at a photograph of the original Statue of Liberty.  That seems extraordinary – unless you understand how your brain actually works. Most people believe that a memory is an accurate snapshot of reality. It isn't. Memory isn't a library. It's a theme park.


The Lady Liberty incident explains much about how themeing operates as the chief element of designed environments. McCaffery and his USPS colleagues didn’t realize that the emotional impact that made this one image stand out was because it carried the themes of the original monument in contemporary form. Themes carry Values – which are simply shared tendencies to prefer one state of affairs over another – in this case; America = Freedom. The updated symbol did that even better than the original because it fit the liberty theme as it always had—only better. 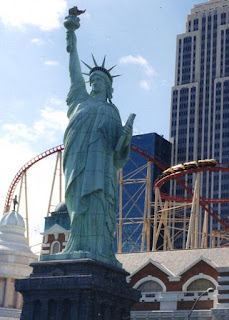 Places (including monuments like the Liberty Statue) have character that sparks chemistry to inspire thinking and feeling for the audience.  Context—the essence of place—directly affects mind and body to set the mental and dramatic agenda, and it does so immediately and subconsciously.  Theme is the mind-setter for story and action by cueing the key emotional state.  This is what stage sets have been doing since antiquity. Place design leverages this awareness of place power to focus attention and channel emotion.  Themeing is the universal language of social artworks with a cultural resonance.


Essentially, the world is a stage because it can be themed--and becoming more so every year. The themeatics skill set is predicated on a deep feel for cultural coding, which is understanding the heavy value of images and icons to the way people think and respond to a four-dimensional symbolic landscape.


Themeing, and the study of thematics, is the key to placemaking, the creative design of “sets” temporary to permanent. The outcome is enhanced reality—one more intense and distilled than its real-life counterpart.  Any space can be themed, extending the traditions of set design to include churches, miniature golf courses, malls, airports and airplanes, and office plans.   If it isn’t already themed, it will be.  I have predicted since the 70s that in the 21st century there will be virtually no un-themed spaces.


Theme parks are the dramatic exemplars of the Experience Economy.  Because they are evocative stages for story, sometimes just in capsule form (as ancient Rome is a shorthand capsule for ancient empires). Even museums, which used to be temples of static, out-of-context artifacts, now have Directors of Visitor Experience. There is a global demand for designers adept at the Art of the Show – the Disney Imagineering term for all park levels of design from two to four dimensions (see John Hench’s Designing Disney (1994), the art history of the Imagineering experience in creating theme-park magic).


But the Disney Magic, the marketing formula for the company’s parks empire, is not unknowable or mysterious.  While magic means unaccountably wonderful, Theme park magic is actually the outcome of a multi-disciplinary artform: story, technology, psychology, human factors engineering, ergonomics, brain research, environmental studies, ethnography, chaos, fractal, and systems theory, and experience analysis.  In addition, the arts / media / architecture / exhibit palette of any theme park consolidates every art ever invented across the millennia, including the multi-futurist threads like Artificial Intelligence and Augmented Reality.


Disney Imagineers were filmmakers and animators able to translate their talent for creating whole worlds (themed, of course) as 3-D spaces.  Some efforts, like Space Mountain (1967), lay behind the feasibility curve for a decade before technology could catch up to their drawing-board visioneering (see March 16, 2017 blog) to design the first roller coaster scored to music and choreographed to its dynamic shape in the dark--all in virtual outer space.  A medieval version of the dark ride are the 14 Stations of the Cross—a classic dark ride Catholicism designed to tell the story of death and resurrection.  The rituals of religion are the original designed experiences, complete with special effects, sound, script, lighting, music, and sleight of hand as the Eucharist–transforming body and blood into the Host, the heavy symbol of Christ and his sacrifice for believers.


This symbolic act of the sacrament happens in the mind in the shared imagination of culture.  Symbolic thinking was the hallmark of the cognitive revolution of 70,000 years ago that transformed our species into makers and rulers of the planet, and, like transubstantiation, is the dramatic visual process experienced in themed environments.  Both involve hyperreality, symbolic reality, and enhanced realism.


The first Imagineers learned their themeing on-the-job, and because they had acres of potential at the parks to inspire their thinking, the studio vaults were always full of unrealized projects, business as usual for any art braintrust.  They became masters of understanding the context in which their creations would have to function—the people-dense, fast-moving, demanding millions of all ages who became their total-immersion audience.


What is theme park magic?  It is the ability of themeatics to transport the mind of millions of guests from the present and immediate by projecting us into the past, to foreign or imagined places or situations, and into the future.  This works by evoking a set of clues derived from the culture we all share.  This shared stock of images and sets (the legacy of film and TV history) means that we instantly recognize a Martian space station, a Parisian café, a Wild West saloon, the Oval Office.  We are there; their shorthand set design feels even more intense than the real thing.  Under the spell of enhanced reality, our emotions are transported to allow us to think differently as we access unaccustomed brain zones.  As the late Anthony Bourdain once noted, “Your body is not a temple, it’s an amusement park.  Enjoy the ride.”


The benefits of themeing have in six decades taken over virtually all venue design.  Forecasts for 2020 for the industry worth is $44.3 billion (source: Global Industry Analysts). As Senior Imagineer John Hench explained the Disney Effect, “Walt was a visionary: he introduced people to a new way of experiencing a planned environment,” starting out from a modest-sized park prototype in California to set a worldwide template for themeing that evokes the hyperreality craved by the human mind.


Well-traveled visitors may remember icons such as the Statue of Liberty, or St. Mark’s Campanile in Venice, from personal experience.  Most, however, call up mediated memories from popular sources—eclectic images from advertising, photographs, television, and movies.  In either case, these memories, imperfect and derivative to begin with, are colored by time and emotion.


Either way, it doesn’t matter. Your brain doesn’t take photographs. It assembles a memory from image fragments and emotions – themes. And every time we recall a memory, we alter it slightly.  The woman in EPCOT's World Showcase we once overheard telling her companion, “I’ve been to Venice, and it looks just like this” was being perfectly truthful, even though Disney’s Italian Pavilion is a melange of Venetian, Florentine, and Roman architecture.  Disney’s Campanile, its colors burnished, physical space compressed, contemporary anomalies edited out, and perspective exaggerated, is faithful to the memory of this woman’s experience in a way that the real thing can never be.


Which is the same reason postal authorities never realized the image they chose was not the real Statue of Liberty.
Posted by Margaret J.King,Ph.D. at 12:14 PM No comments: