Black Swans: What you don’t know CAN hurt you 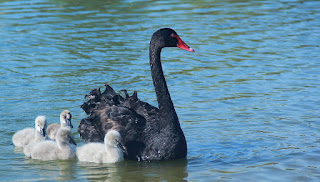 There may be a piece of information consumers need that they don’t know exists - or even suspect is out there.  Black Swans suddenly change the way you see and assess situations, the “leverage multiplier” needed to redefine problems, revealing new sources for solutions.

“The unspoken breakthrough dynamics of a negotiation….  Factors you didn’t know about and were not accounting for.…the leverage multiplier.”

Black Swan events have become infamous factors in the global culture now emerging, the wider culture we all inhabit.  The pandemic of the past year 2020 is a leading example.  But the term is not a new one.* Once people thought that all swans were white, as those were the only ones they had ever seen. Their worldview changed when the first black swan in nature was actually sighted in Western Australia by the Dutch explorer Willem de Vlamingh in 1697.  From that moment of discovery, the swan of a different color at once became a metaphor for newfound potential.   In 17th-century London the term was used to denote an unforeseeable event, one with wide and usually unintended consequences.

While the cues and markers might be around and even visible, until there is a verified sighting – real proof of existence that people can agree on—there is no mental file folder that can allow the mind to consider and build on an idea.  An example is the current Covid world crisis that, while predicted in theory, was nevertheless not seen or prepared for. Impossible ideas are relegated to fantasy, making it impossible to operate within the realm of creativity and innovation as possibilities with real potential.  Other examples of “impossible” inventions?  1) the theme park and 2) Assisted Living, both thriving institutions of consumer entertainment and senior living.

Founder of the Black Swan Group Chris Voss navigates corporations through the complex problem-solving process of negotiation, the key skill in multi-party actions. Voss has assembled a manual of problem-solving approaches based on his background as an FBI hostage negotiator.  His experience models the tactical uses of emotional intelligence to avoid compromise, ending with a resolution in the client’s favor.

It is easy to imagine developing training along the lines suggested in the Voss book outside the more left-brained Getting to Yes approach, aimed at discovering the Black Swans in the equation to fill in vital information either missing or disregarded.  The simple recognition of these factors can result in summary resolution of problems that so far have been stubbornly resistant to a mutually satisfying solution.

Part of the success outcome, of course, depends on the wits and experience of the negotiator to spot that piece of information, or its space in a familiar pattern, that will signal how the original problem got its start and kept on rolling.  As well as how to untangle and reorganize which facts and events are vital in order to redefine the problem and multiply the leverage to win.

On the consumer front, these could be: A glitch in computer programming no one has identified or fixed: the Y2K crisis, the widespread EPIC (“disaster”) software failures in healthcare, or the JPMorgan Chase bank overdraft charges of $34 up to three times per day. These each took many months to recognize and uncover.  Or a company acquisition that blocks customer repairs and refunds; an offer to reduce a loan rate has been retired, but thousands of customers are still eligible under its terms—and the new service reps don’t know it even existed.  Most typically, the company’s own needs, rules, and liabilities are driving the negotiation, but the service reps are talking as if they have a “customer-first” ethic, confusing every interaction.  The credit card company, the health insurance company, the hospital, the doctor, the physician practice group, and Medicare each have different policies and practices, and they are not in alignment, creating chaos for the patient and family.  No one has an aerial view of the overall gridlock—the EPIC program failures are still on a roll as of this month.

Finding solutions requires relocating the problem connection between the customer’s problem and the company’s problem.  It takes a wider vista to find the missing piece or pattern.

Taken to a panoramic scale, in a recent Fortune issue ((Aug/Sept 2020), editor Clifton Leaf writes about the value of cross-cultural commerce in itself. Cross-border trade now is nearly two-thirds of world economic output; long before this, it made America the first world superpower. This emerging world is opening new markets for ideas as the key attribute of the Global 500, the planet’s top firms.  “You get to dip into an entire new world of knowledge and innovation activity that has been closed to you before,” says Fabian Trottner, economist at UC San Diego who explores the export / innovation connection.  This wider horizon can yield unsuspected swans in the form of new information leading to new frames of reference.  Just what is called for to solve intractable problems ranging from consumer issues to international crises.

*The Black Swan: The Impact of the Highly Improbable (NY: Random House, 2007) by Nassim Nicholas Taleb is the popular source for this concept.