Do you know your Medicare number offhand? Try memorizing this! 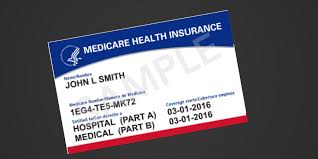 Being asked for a new piece of information by Reception when you are waiting in line for a colonoscopy screening is no fun – especially when this information is not listed anywhere as required for check-in, and you’ve never been asked for it before.  In my case, it put me in the role of problem-solver, not my job as patient.  Yet another example of assumptions made by medical centers but not communicated to the patient—especially in time to do anything about them.

The latest Medicare number is an 11-digit alphanumeric randomly generated “Medicare Beneficiary Identifier” (MBI), introduced to prevent fraud and identity theft and protect patient information.  It went into effect in January 2020.  It replaces the familiar Social Security number.  Normally it is part of any insurance company record, whose own member number substitutes for the Medicare card.

Like Canada’s postal code (as well as the British, Irish, and Dutch), but even longer than the longest such postal code in the world, Iran’s 10-digit format, it is difficult to read, type, or memorize.  This is, of course, the better to thwart thieves intent on ID theft by making it impossible to guess, and by removing any links to Social Security.  But the same goes for the legitimate code owner: in this case, me.  Here’s the format:  1AA1A11AA11, where A is a letter and 1 is a digit.

This might be expressed as 5DH7D32RS87, for instance (not my personal MBI, BTW).  This format risks mistaking certain letters for numbers (like O and l for zero and one), and the Q looks a lot like zero while G looks like a 6 and B can appear as 8.  When you type out these mixed codes, your brain is forced to toggle between two systems, numeric and alphabetic, which results in mental stress.  It also requires the added motion of hitting and releasing the Caps key again and again.

Recently I had a close encounter with this piece of information I didn’t know I needed, and unlike my SS number, have never tried to memorize.  I arrived at Reception at 8:30am for my screening, for which I had spent the past week prepping with diet and clearing-out medication—not a process anyone ever looks forward to repeating.  The screening itself is easy; the prep is where all the work is.  Just the thought of wasting and then repeating this effort is highly stressful.

Everything went fine until I was asked for my Medicare number.  I never carry my Medicare card, and I knew the clinic had all my insurance numbers from six months ago.  The patient instructions specify not bringing any valuables, so I left them home.  Here I was now thinking that all my diet and prep steps were about to be derailed – an upsetting potential.  According to the reception staff, Medicare is insisting more and more often on the number, and the practice must enter it in order to admit the patient.  Of course, had I known I needed it, I would have made a point to bring it with me.  Apparently there is no advance notice – just a demand by the check-in system that works by random chance.  And at a point when there is really nothing the patient can do about it.

This missing code instantly created a gap that had to be bridged, one that threatened to block my care.   As the staff began running around trying to figure out this sudden new demand—as if this were the first time they had ever seen it--I began thinking hard: how could I as patient solve this for Jefferson GI?  And a tandem thought: Why was this suddenly the patient’s job?  This is analogous to standing in line to board your plane, only to be told you need a second form of ID—and all you have to show is your driver’s license.

I suggested calling Cigna, my Medicare Advantage insurance, which must link to Medicare.  There was also Medicare itself; had they tried here?  How about my primary care doctor, also in Jefferson’s system?  Maybe Billing would have this information.  It turns out, after 15 or more minutes and a steady line of patients building out behind me, that’s where the department found it.  I was at last admitted, but only after a hair-raising episode of fear, uncertainty, and doubt.  Patient Assistance even suggested that if these ideas failed, I could always call my husband at home and have him locate it for me in my home office.  However, he had just escorted me to the building and wouldn’t yet be there to wade through my medical files.  Now my household was getting involved, not a direction I wanted to go. (Those living alone are on their own here.)

I did point out to Patient Assistance that this Medicare card requirement was a bottleneck that needed to be handled.  Will they be able to solve this?  Isn’t the reception staff tired by now of trying out fixes?  Don’t they need a solution that works?  Or is the patient going to be the go-to party to solve problems that belong to the health system?  I’ll find out in another year, when my return visit will schedule.

Update:  On emailing Billing, I received the following reply from the staff:

The front desk is required to ask all patients that have Medicare Advantage plans for their original Medicare ID# [the MBI].  The system prompts them to ask.  I’ve sent an inquiry to the registration team at Jefferson to ask them why this is such an issue. It seems to have become an “ask” after we had a recent upgrade.  I will let you know what they tell me when they respond to me next week.

Is this new prompt built into the software upgrade?  Reception tells me they see it randomly, not routinely.  In any case, upgrades need to be examined for any new demands on the users on both sides of the counter.  And then coordinated with instructions to patients before, not after, the admission process.  This clearly was not carried out, meaning the patient could end up without service.  At the least, it produces some hard emotions and memories, and delayed service that cascades back down the waiting line.